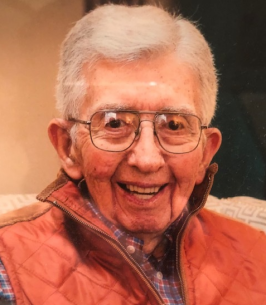 Troy Eugene (TE) Patchell, the son of Ethel Hicks Patchell and Thomas Earl Patchell was born on September 13, 1926, in Quitman, Arkansas and passed away on September 27, 2022, at the age of 96 years.
The youngest of seven children TE grew up on the family farm near Quitman where he played basketball and served as president of his class. After serving in World War II in the United States Army, he began his sales career when brother Oscar and Cecil purchased Heber Springs Wholesale Grocery in the late 1940's. TE continued to work there until his retirement just before his eightieth birthday. Known for his strong work ethic and his kindness, TE developed lasting friendships with his customers.
TE was a care-giver to his wife for several years prior to her passing at which time he joined his son and family to live in Little Rock. His greatest joy came from time spent with his family. He is preceded in death by his parents, sisters Nellie Louise Patchell and Mildred Elizabeth Love, brothers; Cecil Hicks Patchell, George Winford Patchell, Earl Leon Patchell, and Oscar Odell Patchell, and his wife of almost sixty-eight years, Vivian Neal Patchell.
TE is survived by one son, Douglas Neal Patchell (Allison), granddaughter, Cara Elizabeth Tharp (Chance) and one great granddaughter. Marlowe Vivian Tharp all of Little Rock
A graveside funeral service will be held at 1:00 PM Sunday, October 16, 2022, in Cleburne County Memorial Gardens by the Rev. Stuart Cranford officiating.